All You Need Is Hate 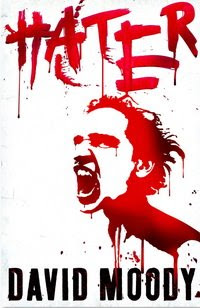 Every once in a while a novel comes along that perfectly captures the spirit of the age. It's a time when violent crime is on the rise with murder the new currency on the streets and hate and intolerance the new religion. Inner city dwellers hide in their homes in a state of paranoia not knowing if the next rap listening hoodie they see will be the one to stick a knife in their gut. Welcome to Britain in the 21st century.

And so on to the book in question, Hater by David Moody. Imagine a world where this state of random violence is taken to the next level, a world where ordinary people transform into psychopathic killing machines for no apparent reason. Given the nickname of Haters by the media they could be anyone, your friend your wife, even your children. One minute your nearest and dearest, the next your impromptu executioner, or you theirs.

Society falls apart and paranoia rules the streets of fear. What do the government know?, what's going on? and who's going to turn into a Hater next?

In Hater, Moody takes his protagonist, Danny McCoyne, into the belly of the beast, turning the fear dial up to eleven in the process. A descent into hell that makes 28 days later seem like a picnic in the park, Hater creeps up on you like a ghoul and burrows into your brain like a starved rat. There are images in this book that are truly shocking and will live with you long after you've read the final pages.

McCoyne is the everyday man observing this descent and the impotent attempts of the authorities to deal with a rapidly degenerating situation clearly beyond their control. No Zombies, Werewolves, Vampires or other mainstream monsters here, the threat in Hater is the dark side of man and it doesn't come any darker than that.

For a taste of Hater David's website has a link to chapter one of the audio book, to give you a sample of this extraordinary novel.

Interestingly, the two recommendations on the books jacket, that first brought it too my attention, are by Guillermo del Torro (Hell Boy, Pan's Labyrinth etc.) and Juan Antonio Bayona who directed the Orphanage. Sniffing a film in the offing I paid a quick visit to IMDB and found that there that there is one coming, with Bayona directing and del Toro one of the three producers. If they do it properly this will be a stunning film, it's already a stunning book.

Hater is the first installment in a planned trilogy with part two, Dog Blood, due out in 2010.

Buy it, read it, then watch out for your fellow man, is that just a glint in their eye or a look of hate?
Books Reviews 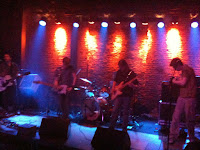 Last night, not for the first time in Brussels, I was in a bit of a quandary. Did I go to Beurskafee to see two post rock bands, Belgiums own Cecilia::Eyes and Alkalys from France, or stay in Churchills to listen to the excellent Men In Blue ? On the principal that I'd probably not get the chance to see Alkalys in the foreseeable future, I opted for the former and headed down to Beurs and the Beurskafee. First off, the Beurskafee venue. I must have walked past it hundreds of times and not known it existed, delving into it's murky heart I was mightily impressed. The cavern like quality of its interior has a superb atmosphere and is ideal for gigs. Spacious, but not overly so, and oozes character from every brick. Little touches like the letters WC projected onto the wall on the steps down to the bog, that's bathroom to you Americans out there, and a ladder ascending into the ceiling behind the bar make it feel like a piece of installation art. I didn't see it, but there
Read more

Band On The Run to la Nuit des Lumières 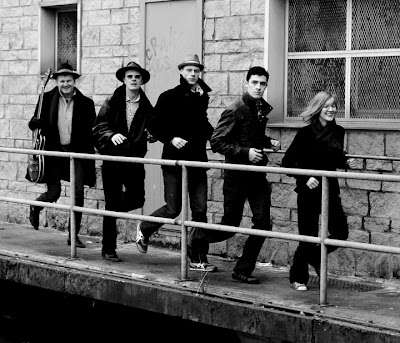 Photo by Gilles Van Eylen The race to become the play at la Nuit des Lumières outside Place des Palais is heating up. Go to the Nuit Des Lumieres website and vote The Narcotic Daffodils . You know it makes sense! Let's take Mr Jacky to the palace.
Read more

Q Classic Nirvana and the Story of Grunge